There’s a New Shuffle in Lilliput

Mount Laurel Press is proud to announce the publication, in August, 2010, of its first book, There’s a New Shuffle in Lilliput, by Joseph Martin Cunningham (ISBN 978-0-9827420-0-6). Originally composed in the mid-1930s as a satirical look at American society, government, and economics during the Great Depression, it nevertheless remains remarkably topical today. 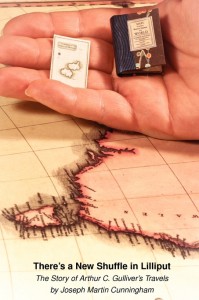 Arthur C. Gulliver is the unlikely narrator and hero of the tale. From an early age, he is obsessed with the idea of visiting the mythical island of Lilliput. With aid of two other inmates of the asylum where he is incarcerated, he is able realize his dreams and voyage to Lilliput. This is the story of Arthur’s adventures and what he finds in the Lilliput of the mid-1930s.

For more discussion of references in the novel, its relation to other Utopian literature, and more about Joseph Cunningham, follow the blog, The Estibelob Wars, on www.newlilliput.com.

There’s a New Shuffle in Lilliput is now available online through Amazon, Barnes & Noble, and other major booksellers.

This entry was posted in Joseph Martin Cunningham, Publications. Bookmark the permalink.